This was the first really cold morning that we’ve had yet. There have been a few mornings with a chill in the air, but this morning there was a bite. I stepped out of Big Blue and my nose was instantly frozen. I quickly stepped back in and did my morning ritual… prepped and taped toes, stretched whatever needed it, ate a couple hard boiled eggs and a banana, filled my hydration pack, and laced up the tennies. While I got ready for the day’s run, the rest of crew packed up camp.

We drove the route I had run yesterday…. Where one day ends, the next begins…literally! From mile marker 67, the day consisted of a 12 mile winding descent…there were a couple of “woops” in there, but mostly downhill. I’ve mentioned it before, but to reiterate myself, the downhill is harder than up. The pounding takes it’s toll on the joints. By about mile 7 my knees were aching, but I was having a great run. The sun was shining, the sky was blue, and the air was fresh.

As we were nearing Phippsburg, we started to see some amazing old barns and rustic cabins that were still inhabited, but very run down. We were getting out of the thick of the hills and into the ranch and farm lands. Real cowboy country. As I crested a small hill, there was a horse to my left up against the fence bordering the road. Typically, horses and mules bolt when they see me coming. But this good ol’ boy just stayed there watching me. I took it as a perfect opportunity to take a break. I picked some dead grass off the side of the road and let the horse munch it out of my flat palm. Then, I spent a few minute giving it a good pat down and rub between the eyes. What an amazing creature.

With a smile on my face, I hit play on my iPod and carried on down the dirt road. It turned to pavement not long after and instantly my joints started to whine. I had had several consecutive days of dirt road, so to be back out pounding the pavement was a bit of shock to the ankles, knees and hips. Not long after hitting pavement, I came to “T” in the road, hung a left and ran not even a ¼ mile before hitting Phippsburg. It was the first town I had run through in 4 days and although it was a population of 204 , there were a few people out and about and couple little businesses open.

With towns, even small towns, come more traffic though. I was scheduled to stop at Phippsburg, but feeling descent and in my rhythm, decided to keep going to get a head start on the next day. As I continued up the road, Marcus and Tory went ahead in the Big Blue and Art, LaVonne and Vaughn took the other vehicles to Stage Coach State Park, where we were planning to call “home” for the next 3 nights. It was a good strong climb initially out of town and no shoulder to be heard of. I was right on the white line, or even on the road as cars charged toward me. When I saw vehicles coming and not pulling away from me, I’d just jump down into the ditch. It’s almost like a video game. 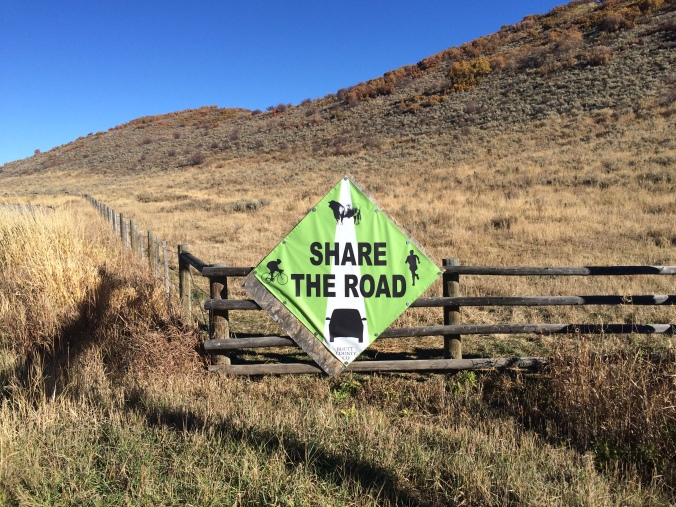 Ahead of me was a bridge. Bridges are always sketchy because there’s nowhere to really jump out of the way if you need to. The bridge was a big bending roadway so I knew the risk was even going to be higher as most people hug the inside corner (which happened to be oncoming traffic). I saw Big Blue on the other side of the bridge, maybe 100 yards away. Picking up my pace as much as I could and keeping my eyes wide open, I started heading across hugging the guardrail on my left as close as possible. A few cars zoomed by but at least tried to pull to the middle when they saw me. Then, ahead, I saw a black pick-up coming at me SO fast… I knew I could be in trouble if he wasn’t paying attention. He wasn’t, or he didn’t care and was trying to run me off the road. Either way, he was on the white line and was approaching quickly without any sign of moving over. I had to bail over the guardrail. Luckily there was just enough room for my toes to catch the edge of the dirt while gripping the guardrail. My heart was racing… that was the closest call yet to being seriously hurt on the road. I took a deep breath, jumped back over the guardrail and sprinted to the end of the bridge where I could continue on. I passed Big Blue and obviously neither Tory nor Marcus had seen what happened as Marcus was flying the drone and Tory just gave me her usual sweet wave and smile.

Just past the bridge was the sign for Stage Coach State Park, so I hung a right and started moving down that road. I turned the corner thinking that I would run another mile, but when Marcus passed me and told me I only had 5 miles left to the park, I decided 2 miles was good. At mile marker 2, Tory and Marcus were waiting with cameras in my face and love in their heart! We were ahead of schedule again.

We pulled into the campground to meet the rest of the gang and all of us enjoyed a little rest. Vaughn and Tory sunbathed, Marcus relaxed in the shade and I got a few moments to myself in Big Blue with the girls. Art and LaVonne headed into Steamboat for a few where we met them after spending some time on the nice sandy beach playing ball with the girls and giving Tory a little shoulder rehab workout with Cross Over Symmetry. We all met up at little Mexican Restaurant where they all ate (I just mowed down chips and salsa). It was our first day on the internet in 5 days so embarrassingly, Marcus and Tory and I buried our faces in our computers to get some overdue work done.

We clocked the mileage from Steamboat to Stage Coach State Park on the way home (17 miles) then finished the night out with a campfire under the stars.

Lesson Learned: Always be on your toes (even if they’re too beat up to stand on).