Finally… a solid nights sleep. Every night so far, there’s been something that has woken me up before I was ready. The dogs, other’s snoring, aching knees, people talking, the need to pee… but this morning, everyone was so kind to stay quiet in their respective tents/campers until I woke up. I slept until 9….I got 12 hours of sleep! It was a brand new day and I was ready to tackle it.

The moment I stepped out of Big Blue at mile marker 49, I pressed play on my iPod and Tom Petty wailed the perfect theme song for the day. Naturally, I sang right along… “No, I won’t back down…” just as I started taking my first steps for the day. Everyone got a good laugh out of it and the day began in the right direction.

Vaughn, Tory and Marcus were all in Big Blue today as we left the Tacoma at camp since we were returning for another night. Art and LaVonne stuck around camp a bit longer and met up with us a few miles down the road. The first 5 miles were a nice easy gradual downhill grade until I reached a fork in the road. The left fork continued downhill and the right had a steep incline. I stopped and looked back at my crew to get confirmation that right was the correct direction so I didn’t climb for no reason. Big Blue was a good 100yards back, Marcus was out flying the drone and Art and LaVonne were behind Big Blue quite a bit. I waved my arms in the air, yelled, lifted my arms up in confusion… and nothing. No one responded and neither vehicle proceeded forward. “Really?” I thought. Rather than getting frustrated, I used it as an opportunity to strip some layer as the sun was coming out. Still, no one regarding my obvious confusion, I waved my arms again. After what seemed like about 5 minutes (but was probably closer to 2 minutes), they started driving forward. Turns out that no one was paying attention to me, but rather on their phones, looking at maps, and flying drones. We all got a good chuckle out of it as I continued on the right fork. And the uphill began.

Yesterday Marcus clocked the uphill as a 6 mile jaunt… turns out it was 7. It’s amazing how being off a mile messes with my head. I hit that 6-mile mark after climbing and climbing and climbing, expecting to see either a flat road or a slight downhill. All I could see in the distance was more incline. My heart sank. I was tired, my legs were heavy, my feet hurt and I was sick of each step slipping out on me from the loose gravel. It seemed like every step forward was only a half of a step with the slipping. Marcus passed me in the truck and all I could say was, “You lied, you said 6 miles.” I realize now, how bad that must have made him feel. Tory, Marcus and Vaughn do so much to protect me everyday, but sometimes in the heat of the moment when I feel like collapsing, my best side doesn’t always shine through. I’m sorry guys, thanks for being patient and understanding. 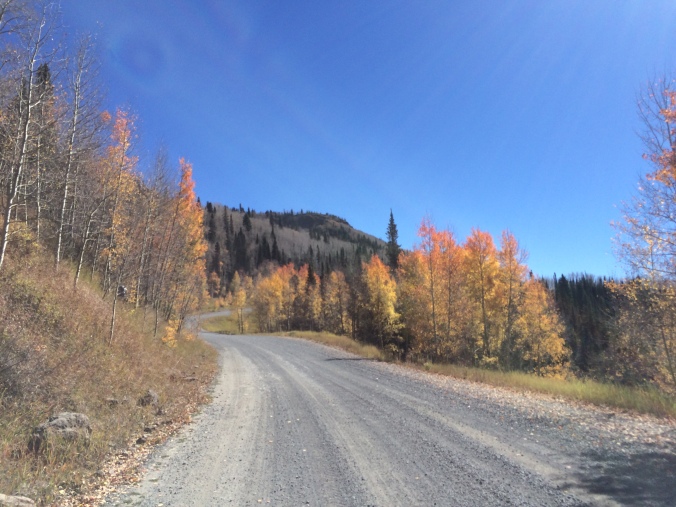 I finally made it to the top! The summit sign read, Dunkley Pass 9764ft. I stopped for a minute to look back at what I had come over. I could see the end of the initial 5-mile downhill followed by the pass I had just climbed. I had a moment of pride. A moment of, “holy cow, I’m actually doing it”. 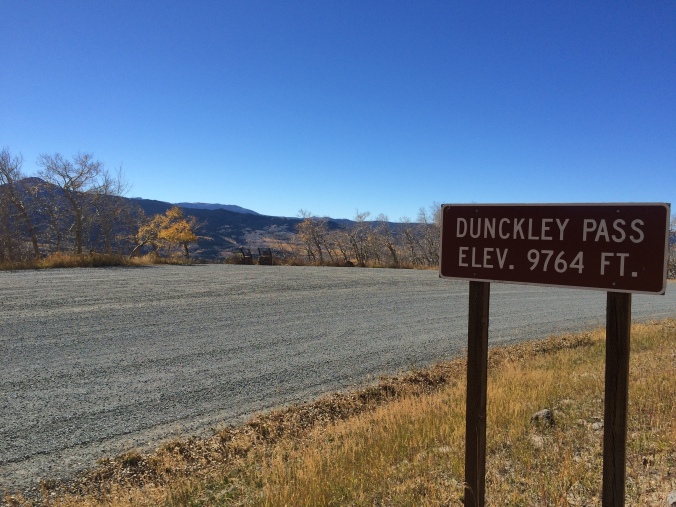 Carrying that pride with me, I headed down the back side of the pass. Today was different than any other day thus far. I didn’t have a destination. From Vaughn Lake to Phippsburg was 31.5 miles and I wasn’t going to do that in one day, but didn’t see anything on the map between the two places. So, when setting the route a few months back, I just knew I had to get that mileage done in 2 days, however that worked out. With the intention of breaking it in half, the goal mileage for the day was 15ish… but I ended with 18. That was 6 miles of a gradual downhill from the summit.

Going up the pass, I had been dusted quite a bit from trucks driving by. It was irritating, but figured they couldn’t slow down too much as they were on a hill and gave them the benefit of the doubt. But those last 6 miles down, my patience was running out. I had literally been dusted by trucks zooming by on the gravel road for the last 2 hours, and I was over it. There was one truck in particular, a white Toyota, with a young guy in it that had passed me a couple of times. Each time dusting me so bad, I had to stop and cover my face. The third time he did it, I finally lost it and for the first time the entire trip, I lost my cool. Road rage set it and I flipped the guy off! One of m favorite quotes ever is “Of all the paths you take in life, make sure some are dirt”. That day I not only got to take a dirt path, but I got to taste it and breathe and was completely covered in it.

I finished the run at mile marker 67 with a smile on my face, dirt in my teeth and another craving for salt and vinegar potato chips. Luckily I hadn’t eaten any of the bag that Art and LaVonne had brought a few days ago. So, in the short drive from where I finished to where we got back to camp, I annihilated all but a few crumbs. Totaling 840 calories of pure heaven in about 10 minutes.

When we got back to camp and the sun was beating down on us, Vaughn, Marcus and I braved the cold water of Vaughn Lake. It had been 3 days of running and I was literally caked with dirt. I scratched an itch on my neck and my finger nails had a layer of brown grime underneath them. It was FREEZING… like take your breathe away, give you a headache freezing. But tolerable enough to jump in, jump out, soap up, jump in , jump out and done! Not clean, but cleaner and at least smelled a bit better.

Lesson Learned: Some people have no regard for others well-being.

Run Across ColoradoSeptember 19th, 2015
It's time… 500 miles for epilepsy… Together we can Move Mountains!
%d bloggers like this: