With Marcus and Vaughn in Big Blue, my dad and Stephan in his truck and Tory in my truck, we had quite the train back up to Little Box that morning. The first 3.5 miles up the canyon were beautiful. The biting cold air stung my cheeks, but at the same time I had sweat pouring down my back as I went back and forth from jogging and walking depending on the grade up this steep canyon road. Without the risk of traffic, the dogs got to run free with me this morning. It was joyous to watch their excitement to just be able to run. That made me smile and remember how lucky I was to be able to do the exact same…I get to run each morning. 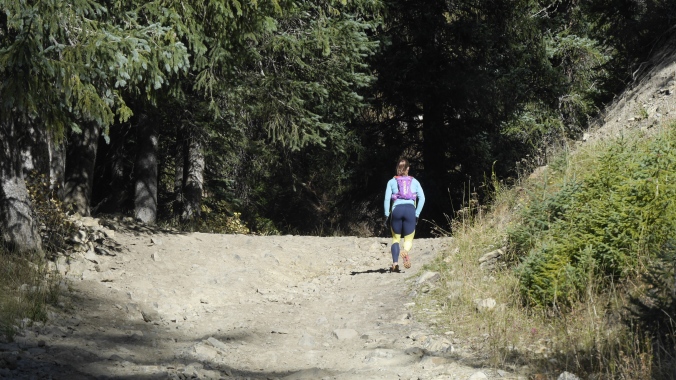 The climb through the pines and aspens was as breathtaking as always (literally and figuratively speaking as we quickly gained elevation). When we hit Triangle Park at the end of Little Box, the dogs had to get in the truck as the traffic increased slightly due to the first week of rifle season starting the next morning. Trucks loaded down with trailers, campers, and all their hunting gear were bound to be all over the place which was too risky for the dogs. For me though, it was a wonderful break. I knew I had miles and miles of dirt road (finally off the hard pavement) and I was in the Flat Tops Wilderness area… my stompin’ grounds.

The next 2 miles after hitting the New Castle Buford road were so enjoyable. The road was fairly flat, with just a few gradual ups and downs. I was able to look over the vast country of beautiful mountains covered in all the fall colors as I made my way onward. Each step seemed effortless when my mind focused on the beauty… until it hit me. The climb started and kept going and going. It didn’t look like much of a grade but after 5 miles of climbing and playing cat and mouse with Marcus and Vaughn in Big Blue, I finally had to just sit down. Marcus (and Tory today) immediately had cameras in my face to capture what they knew was a vulnerable moment. Most days I can handle this as I know it’s his job, but this wasn’t one of those days. I was so irritated and tired that a seemingly simple grade was kicking my butt. Then I was reminded that I was at 10,000 feet, I had climbed all day the day before and I pretty much only ate soup yesterday. I didn’t have an option though, I had to keep going. 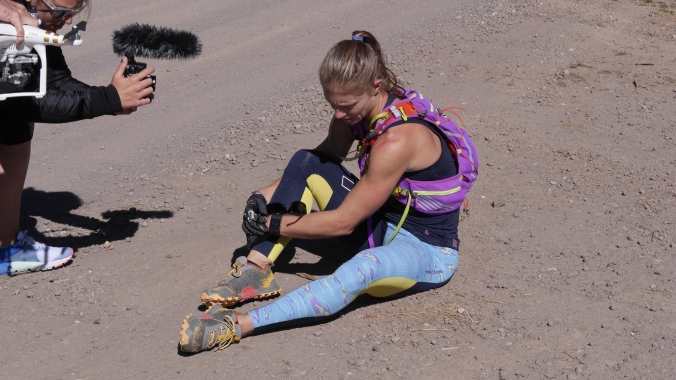 I stood up, dusted off my butt from sitting in the dirt and started forward again. A few more miles in, I was in a rough spot again. My mind was beating me. It was telling me to stop and that I couldn’t make it. I literally was having a fight between my body and my mind… everything hurt and was so tired, part of my brain was saying rest, the other part was saying ‘keep moving forward’. Finally at 11.5 miles I reached the summit. With another brief rest and a bit of a temper tantrum, I collected myself and saw downhill in my future. For the next 13 miles I let gravity do the work, it was time to coast downhill. That also comes with a price though. Running downhill is easier on the legs and the lungs, but WAY harder on the joints. My knees, hips and ankles were screaming at me. Because my toes are such a disaster, my good POSE running form left weeks ago, and the heel striking was causing even more jarring on the joints. But, I just found a rhythm and kept moving.

I’m not sure what mile it was, but I was running past a hunting camp when I saw a guy in a blue shirt that looked a lot like a guy I went to high school with, Cole Fritzland. I thought, “there’s no way that’s him though” and kept truckin along. Then all of a sudden a here someone yell, “Jenny LaBaw!”. I turn around and see this crazy ol’ guy in a cowboy hat running toward me. “You remember me?” He said as he got closer. I recognized him right away, “Kevin Pressler’s dad” I said. I felt horrible I couldn’t remember his first name right away. “Yeah,” he said. “It’s Butch.” Then he gave me a big ol’ hug. I walked back to his camp where, sure enough he was there with Cole and Cole’s boys. They had read about Move Mountains in the paper and I think we were all shocked that we ran into eachother. We stood around and chatted a bit before it was time to get going again. The numbness in my feet had worn off, so my first several steps out of camp were a hobbling mess as Marcus followed me with the drone and I waved goodbye to old friends. 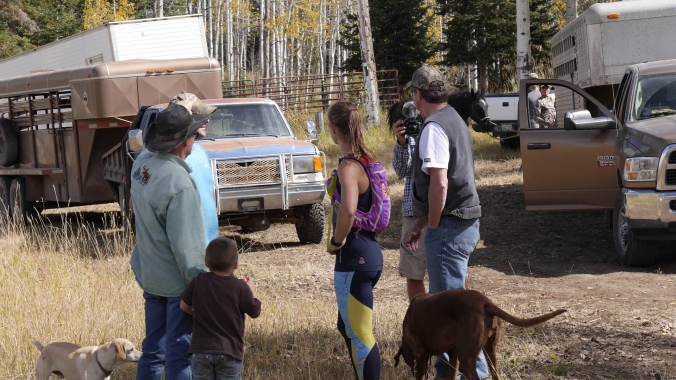 They were the spark I needed to keep moving that day though. Marcus rode beside me for a bit while we winded down the switchbacks through the orange and yellow aspens with the fresh scent of wild game blowing across us every now and then. As we continued to descend down into the valley, I couldn’t believe I was running into the area I grew up fishing, camping and hiking in. My love for the outdoors was born in these mountains and I was running through them! With every bone and muscle in my lower body aching, I saw the end in sight. I saw the Buford store… somehow I picked my pace up for the last 800m or so, turned right onto North Fork Road and “sprinted” the last 100m to the store… I was done! 24.6 miles with 2700ft climb and 2300ft descent. All I wanted was Salt and Vinegar potato chips! Marcus secretly text his parents, who were on their way up from Rifle and much to my surprise, they showed up a few hour later with chips in hand. Thank you Art and LaVonne! It’s the little things!

After a long, much needed massage from Tory at the generously donated cabin for the night, my dad suggested that we take the crew to South Fork Campground before dark. We spent countless long weekends at this isolated campground growing up, so of course I was in and so was everyone else. Six of us piled in my dad’s truck and headed down the hill. We took a right just before the Buford store and winded around the oh-so-familiar 10-mile dirt road to where it deadends at South Fork. We passed cabins that I remember dreaming of owning when I grew up. We passed herds of cattle grazing on the soon to be snow covered pastures. We looked up over the Flat Tops at where I had run from that day… it looked impossibly far. As we approached the campground, there was private property to the right with about 100+ head of elk getting ready to bed down for the night while the fence was lined with men and women in blaze orange drooling as the looking through their binoculars. Hunting season opened the next morning and it was as if the elk were just toying with the hunters emotions. The irony of the whole scene sent us all in a good chuckle.

The campground was just as I remembered it, only with a lot more people and the big bouldering rock I was so proud of as a kid seemed way smaller than I remembered. We circled the dirt road and then headed back out. As we neared the herd of elk again, my dad pulled over and we all got out. Stephan was snapping shot as he had never seen in elk in the wild before. My dad pulled out his elk bugle to see if he could get some bulls talking back. Sure enough, there were 3 big racks that turned toward the sound and began bugling right back. The sound was all consuming. My thoughts were still, my heart was calm, my emotions were raw. I was exactly were I needed to be at that time, with the people I wanted to be with, in a moment of complete peace.

As we listened to the sounds of the wild, the sky began to turn every shade of pink, orange, and purple you could imagine. The mountains became silhouettes and another day came to a close. 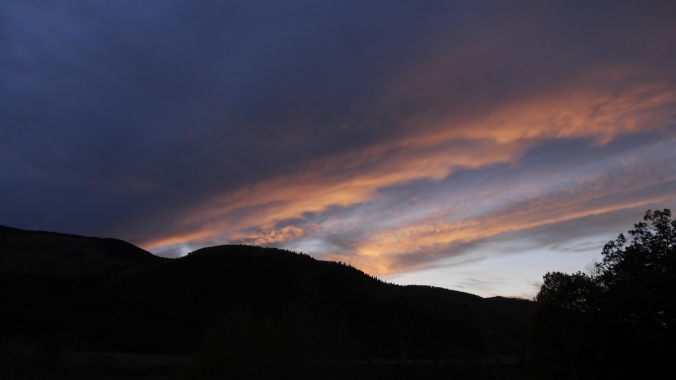 Lessons Learned: The sounds of nature calm my soul.