Feeling rejuvenated from a good nights sleep after 2 days of driving to Durango, Marcus and I united with my first support crew… my mom (Cathy Desautels), Marcus’ friend from growing up (Matt Hamblin) and a good friend from home (Vaughn Zellick).   We jetted downstairs, ate a couple hard-boiled eggs and a banana and anxiously drove 25 miles south to the New Mexico/Colorado border. Waiting for us at the “Welcome to Colorful Colorado” sign were two vehicles filled with people that were about to become lifelong friends of mine. Jim Schoenberg with his family and Leah Yates with her family… both from Albuquerque, New Mexico, both have epilepsy and had never met. They were there to join me in the start of this epic journey.

After a few hugs and a few tears, at approximately 9am, Leah, Jim, Matt, Hannah (Leah’s daughter) and I took off North on 550 with our entourage of vehicles behind us cheering loudly! We took off trotting at a nice easy pace and about 8 minute into the run I heard the buzzing of Marcus’ drone (he’s the videographer for the event)… then about 60 seconds later I heard a crash and then clanking on pavement. I looked behind me and saw the drone, rotors down broken into pieces but still buzzing in the middle of the highway. Quick instincts… look left… no cars… sprint into the street and grab the drone. It was toast and we had just begun. Marcus had accidentally hit a telephone wire with the drone (he couldn’t have done that if he tried). Next thing I know, Marcus is hurdling the median to come take the battery out of the drone to turn it off. He was so good about keeping a smile on his face and encouraging us to keep going, even though I know he was screaming inside. However, not 10 minutes later another drone was ordered and in route. Our first hiccup was over with!

The rest of the day was less eventful… we just kept chuggin along up 550 waving at oncoming traffic and carefully dodging those that weren’t willing to give us any room on the little to no shoulder we had to work with already. Life was good though… we laughed, we got to know each other better and we got to share some pretty deep moments.

Leah and Jim did a phenomenal job and I was so glad to have them with me. Matt made it the entire distance with me and I realized that day how important it is to have company during these long days.

We got back to the hotel and a reporter from the Durango Herald (local newpaper) was waiting for me. We did a little interview then wrapped the day up with a little bit of “chuck-it” with the dogs at the park, a soak in the hot tub (hotel rooms donated by good friends), a good yummy meal in my belly from True Nature Kitchen, a leg massage from the beautiful Tory Zellick (my dear friend and talented massage therapist that will be with me all trip…I’m SO LUCKY!!) and then some good shut eye for day 2.

Today started amazing. We again woke well rested and excited for another beautiful Colorado day. We back tracked 2.5 miles from what I had run yesterday to be able to start at CrossFit Durango (poor planning on my part, but what is 2.5 miles when you have 500??). It was well worth it… the people of CrossFit Durango so graciously woke up early on a Sunday to run with a girl they’d never met before. They also, suggested/encouraged a much safer route, HWY 250 rather than 550 to avoid traffic. It added yet again a few more miles to the day, but the safety factor was way more important. 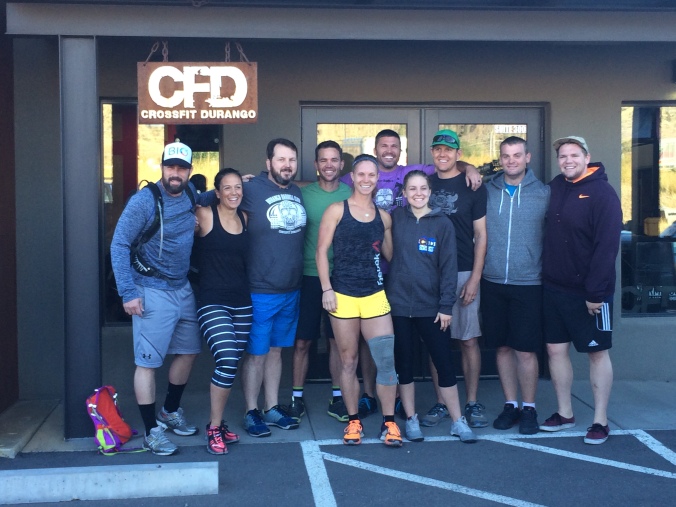 I am so sorry to say that I don’t remember everyone’s name that started the day with us, but THANK YOU to each one of you for joining us in this effort. The smiles and laughs made the day start off with a bang. There were 3 people that stuck with us for the longest and I got to know the best so do remember their names. Jacob, one of the owners, just got done with a power lifting meet (quite the opposite of distance running) and held up great. Baird stuck with us for a good 8 miles or so (sorry if I have that number wrong, the miles are starting to get lost). And Molly stuck with us for 13 miles… it was great meeting her as we are pretty much long lost sisters. Turns out we played against each other in high school soccer, almost went to the same college and really have so much in common. We have promised to meet up next year to hike the Colorado Trail together (a bucket list item for each of us).

After Molly dropped off it was Matt and I at it again… it was definitely a jog/walk sort of day for Matt as he was terribly sore, but a trooper! At about mile 17 he had to call it. It was my first solo mission… I took off at a bit faster pace then we had been keeping because I felt great… however due to the change in route, I wasn’t exactly sure how far I had to go. About mile 20 the fatigue started to hit in from the day (and discouragement as the day was only supposed to be 17.7miles). It was 85 degrees outside, but the heat radiating off the black asphalt was much hotter. My head hurt, my feet hurt, my legs hurt, my mind was starting to go to a dark place…

My support crew could tell and they started to suggest stopping once I hit the 550 intersection because traffic was bad, I was tired and it was hot. I was adamant to keep going… although I couldn’t be facing on coming traffic because there wasn’t enough shoulder, I had Marcus follow me in the support truck with flasher on the north bound side of the road… it probably wasn’t safe, it probably was stupid… but I had my mind set on Haviland Campground and I was going to make it.

I started jogging 3 reflector poles then walking 1… just to take my brain somewhere else. I started thinking about Jim and Leah and the other people that I am out here running for. It was only day 2 and I was having to go into my head to complete a day. Was I going to make it? Can I really run 500 miles?

Then… all of a sudden Matt came out of nowhere…scared me to death… and we started chuggin along again and he started telling me stories that I was half way listening to and half way just focusing on taking another step forward. The distraction was enough to get me to the finish… I saw the brown sign ahead that I knew meant campground and started booking it… I saw my mom, Tory, Vaughn and Dario (my mom’s boyfriend) ahead and just went as hard as I could and collapsed at the entrance to the campground. It did it.. day 2 complete.

A quick jump in Haviland Lake with the dogs, then a nice big meal and music by the campfire to round out the night.   Life is good.